Since the intervention of the Global Environment Facility (GEF) in December 1993, when the first international water project was launched, considerable focus was placed on the prevention and management of marine pollution by: setting up integrated coastal management (ICM) pilot sites in Xiamen (PR China) and Batangas Bay (Philippines); mobilizing subregional efforts (Indonesia, Malaysia and Singapore) to address marine pollution problems in the Straits of Malacca and Straits of Singapore; and strengthening capacity development, especially in developing countries such as Cambodia, PR China, DPR Korea, Indonesia, Philippines, Thailand and Viet Nam.

The project, known then as the Prevention and Management of Marine Pollution in the East Asian Seas, was implemented by the United Nations Development Programme (UNDP) and executed by the International Maritime Organization (IMO), while the Government of the Philippines hosted the regional project office within the Department of Environment and Natural Resources (DENR) compound in Quezon City, Metro Manila.

The successful completion of the pilot phase project in September 1999 led to the building of confidence and recognition of the need to develop stakeholder partnerships in addressing the increasing environmental challenges in the seas of East Asia. A second phase project (1999–2007) focusing on building intergovernmental, interagency and multisectoral partnerships in environmental management was supported by GEF, with implementation beginning in October 1999. The thrust of the new project was to build partnerships, hence the acronym PEMSEA, to represent the new project initiatives.

The major focus of the PEMSEA project included:

In December 2003, participating governments and collaborative partners endorsed the Sustainable Development Strategy for the Seas of East Asia (SDS-SEA), a document that outlines a shared vision as well as the collective strategies and approaches to achieve the goals of sustainable development for the region. The implementation of the SDS-SEA requires a long-term commitment, policy reforms, strategic management interventions and significant financial resources. In June 2007, the GEF Council approved Phase I of a 10-year project (2007–2017) to implement the SDS-SEA, which facilitates PEMSEA's transformation into a self-sustaining regional operating mechanism. GEF will provide the necessary financial support to cover the incremental costs of addressing regional environmental issues that are of global significance via implementation of the SDS-SEA.

In 2009 PEMSEA gained international legal personality, and PEMSEA together with the SDS-SEA was recognized as the regional governance mechanism and framework for the sustainable management of the seas of East Asia. PEMSEA began work on the blue economy while scaling-up ICM activities. In 2014 the SEA Knowledge Bank was established, serving as a repository for reference materials for ICM from throughout the region.

In 2015 the PEMSEA Network of Learning Centers (PNLC) was established, bringing academia and coastal development closer together. During this year PEMSEA rebranded to reflect its expanded role and its international personality, moving from the older 'circle' logo to the current 'propeller' logo. The new logo reflected the interactions of the coast, the oceans, and people, moving together towards a more sustainable future.

In 2016 PEMSEA launched the Youth Grant, before launching the PEMSEA Network of Young Leaders (PNYL) in 2018. Towards the end of 2018, PEMSEA released Local Contributions to Global Sustainable Development Agenda : Case Studies in Integrated Coastal Management in the East Asian Seas Region, containing lessons from its 25 years of integrated coastal management. PEMSEA looks forward to another 25 years where it can continue to work towards the vision of healthy oceans, peoples, and economies. 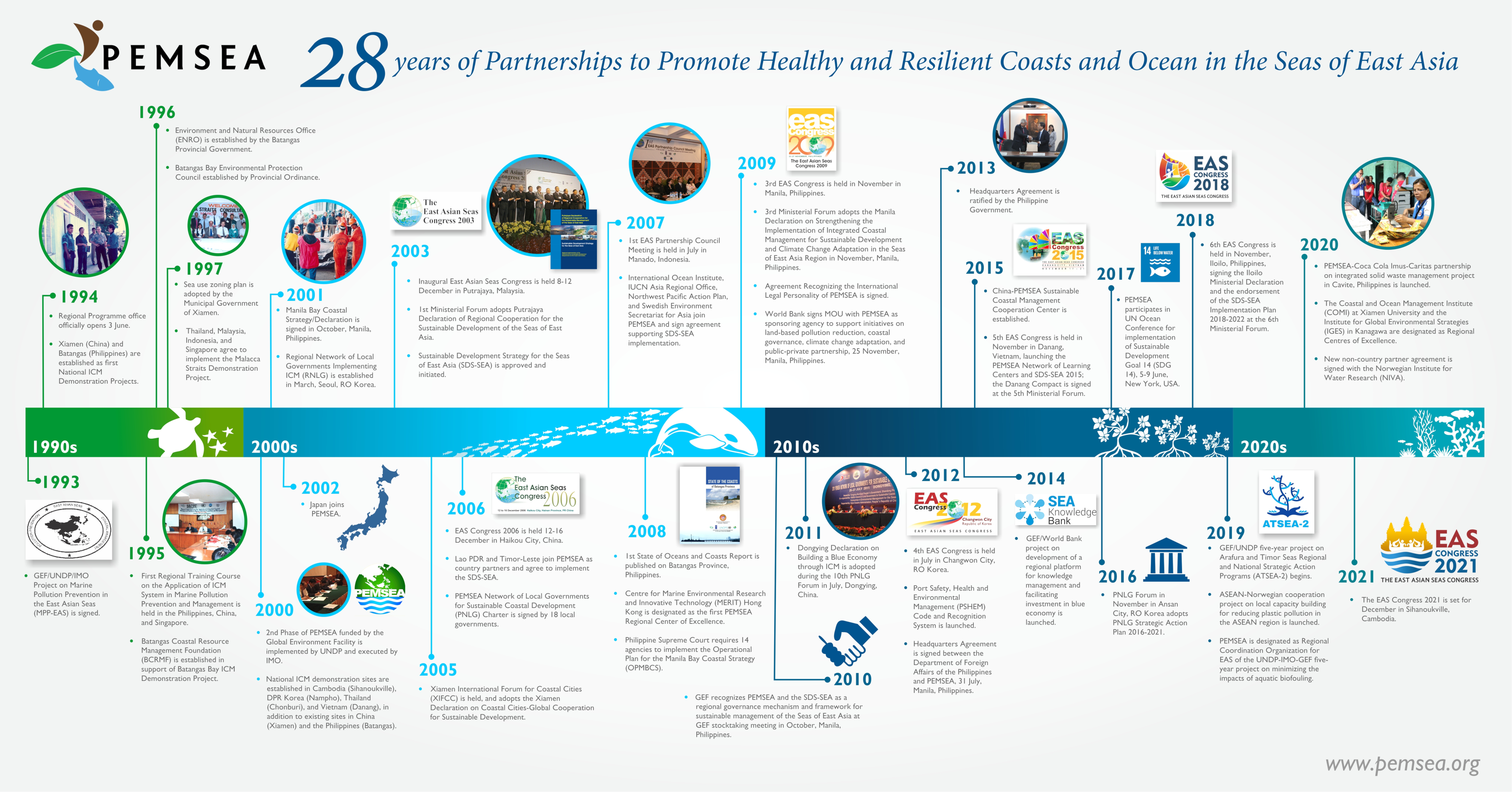