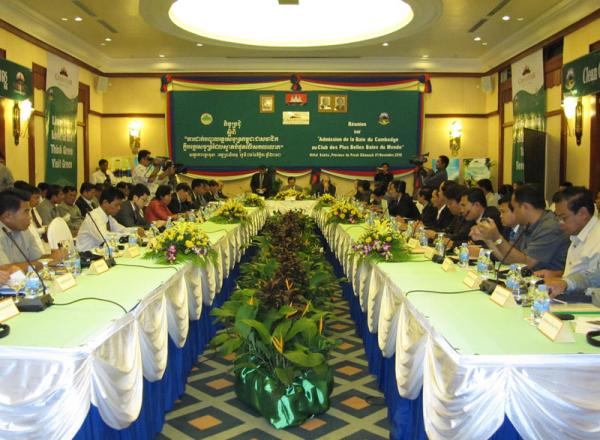 Toubacouta, Republic of Senegal — Development serves Conservation, and Conservation serves development. Cambodia's development principle and commitment to coastal and marine management was recognized recently by the Paris-based Les Plus Belles Baies Du Monde (The most Beautiful Bays in the World) as it officially accepts the Bay of Cambodia as one of its members at the 7th General Assembly of the Most Beautiful Bays in the World Club in Toubacouta, Republic of Senegal on 26 May 2011.

Speaking at the closing session of the General Assembly, H.E. Dr. THONG Khon, Minister of Tourism of the Kingdom of Cambodia emphasized the importance of shared responsibility and collective action that comes with development opportunities in Cambodia's coastal areas. H.E. Thong pointed out the contribution of coastal and marine resources to the thriving tourism sector and stressed the country's commitment to protecting its natural resources as one of its priority poles of socioeconomic, trade and tourism development. In addition, he also reiterated the importance of an integrated approach and coherent management to address the complex and cross-sectoral nature of coastal resource management.

Cambodia's membership came as a result of the application made by the Province of Preah Sihanouk Province during its Sixth Congress in Halong Bay in May 2010. Subsequent evaluation on sustainable management practices and economic potentials in the province was made in a year's time in several meetings held in Sihanukville. The Ministry of Tourism then extended the application to cover the entire coastline and cover other provinces to encourage effective coastal management to other provinces, hence the coverage of Cambodian Bay which spans 440 kilometers across the coastal provinces of Kampot, Kep, Koh Kong and Preah Sihanouk.

To promote protection of its resources, generate stakeholder support and showcase the unique cultural and environmental heritage, Preah Sihanouk province will host the country's First Sea Festival in December. The event is hoped to mobilize support for the protection of Cambodia's coastal and marine resources. The province and the Ministry of Tourism will also host a program on July 8 at the Independence Beach to celebrate its membership to the club.