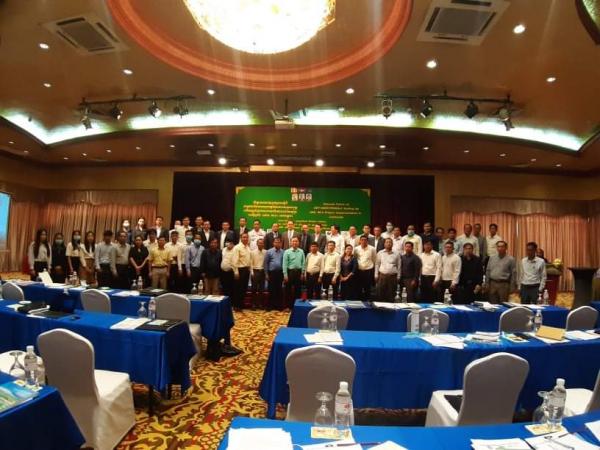 A national forum to conclude the implementation of the GEF/UNDP/PEMSEA Scaling Up SDS-SEA Project was held in Phnom Penh, Cambodia on 2 September. The implementation of the project was initiated in 2015 through the signing of a Memorandum of Agreement between and among the coastal Provincial Governments of Kampot, Kep, Koh Kong, and Preah Sihanouk, the Ministry of Environment, and the PEMSEA Resource Facility.

This forum was an opportunity to share and recognize the accomplishments, good practices, and lessons learned from the project implementation throughout the past five years, as well as discuss the sustainability and possible scaling up of outputs and activities beyond the project. It was organized by the General Directorate of Environmental Protection (EPA), Ministry of Environment (MOE) with funding support from the Global Environmental Fund (GEF) and technical support from the PEMSEA Resource Facility. The participants of the forum were 80 representatives from the local and national governments, non government organizations, academic institutions, the private sector, and other relevant stakeholders.

The project has generated a number of outputs and created impacts at national and local levels.  At the national level, the different Ministries and relevant stakeholders collaboratively developed the National State of Oceans and Coasts of Cambodia report. A large part of this report is devoted to the value of the blue economy and other coastal and marine economic activities in Cambodia. All told, around 16% of the national GDP came from directly ocean-related economic sectors (e.g., fisheries, ports and shipping, coastal and marine tourism sectors) in 2015, employing over 3 million people. The total economic value of coastal and marine ecosystems, including direct (e.g., tourism and fisheries) and indirect value (e.g., shoreline protection, climate regulation, waste assimilation), has been estimated at around USD 200 million – 500 million per year. Other outputs at the national level included the updated White Paper on the Sustainable Development of the Coastal and Marine Areas in Cambodia, the National Oil Spill Contingency Plan, and the National Guideline for the Use of Dispersants. 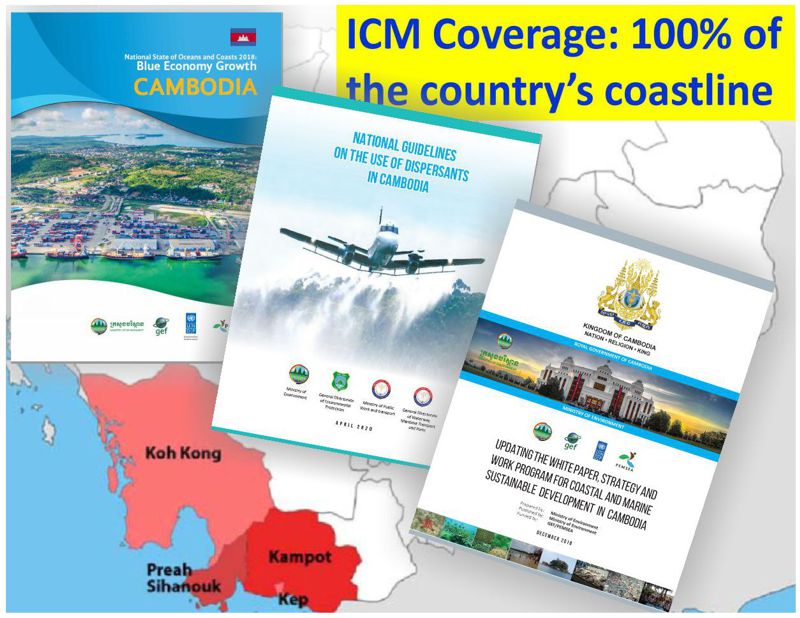 At the local level, 100% of Cambodia’s coastline is now under integrated coastal management (ICM). The ICM program is implemented in the coastal provinces of Kampot, Kep, Koh Kong and Preah Sihanouk with focus on strengthening the governance mechanisms for integrated management and addressing various aspects of climate change mitigation and adaptation, disaster risk reduction, habitat protection and restoration, fisheries management, pollution reduction, and waste management.

The implementation of the Port Safety, Health and Environmental Management System (PSHEMS) in Phnom Penh Port and Sihanoukville Autonomous Port resulted in better and safer operations in the ports in compliance with national and international laws. This was a result of actions including strengthened capacities and improved environmental management.

The Royal University of Phnom Penh, PEMSEA’s designated ICM Learning Center in Cambodia, has contributed in strengthening capacities and providing technical support and scientific advice to the coastal provinces in various aspects of ICM program implementation.

Strengthening the capacities of national and local institutions through on-site, national and international trainings and other capacity building measures (e.g., traineeship and study visits) has been one of the strategies of the project to improve and enhance the sustainability of ICM program implementation at local levels.

With the completion of the project, H.E. Eang Sophallet, Secretary of State of the Ministry of Environment, urged the Provincial Administrations of the four coastal provinces to sustain the implementation of their ICM programs and leverage support from different local, national and international partners. He also urged the EPA of MOE to collect and compile databases relevant to coastal and marine resources, including potential benefits derived from them that will support the sustainable development and management efforts of the coastal and marine areas.