A global center of marine diversity, an archipelago with more than 7,100 islands, and one of the longest coastlines in the world, the Philippines provides visitors with access to all that is wondrous and beautiful about the ocean and coastal resources, as well as insights into the challenges to sustainable development and management of those very resources. The country is confronted with the enormous challenge of finding a suitable path to food security, sustainable livelihood, poverty alleviation and reduction of vulnerability to natural hazards, while protecting ecological integrity and strengthening economic growth. Responding to this challenge, integrated coastal management (ICM) has emerged, through practice, as a better alternative in the governance of coastal and marine areas. In as much as the Philippines is an ocean-dependent country, application of ICM is of vital importance to the country’s long-term social and economic development.

The issuance of Executive Order (EO) 533 on 6 June 2006 adopting ICM as the policy framework for the sustainable development of the coastal and marine environment and resources is considered a significant milestone in the long history of coastal management in the Philippines. An ICM Bill filed at the Senate and House of Representatives, which captures the provisions of the EO, aims to institutionalize ICM through the enactment of the Bill into ICM Act.

In 2013, PEMSEA assisted the DENR to draft a National ICM Program for Sustainable Development of the Coastal and Marine Environment and Resources of the Philippines, as mandated by EO 533. The program targeted developing and implementing effective ICM programs in partnership with local governments, covering more than 20% of the country’s coastline over the next 5 years. In 2015, the Philippine Government signed the Da Nang Compact along with 10 other East Asian countries, committing to scale up ICM to cover 25% of the regional coastline . An independent Third-Party Assessment (TPA) was conducted in 2017 to objectively evaluate ICM program coverage in the country, to benchmark the ICM processes and controls that have been established in selected provinces and municipalities against the requirements of PEMSEA’s ICM Code, and to provide guidance on the standardization, streamlining and strengthening the national ICM program. The results of the TPA has confirmed the Philippines achievement in ICM scaling up where the assessment of 32 coastal provinces (out of 64) covered an estimated coastline of 9.747 km or 26.85% of the Philippine coastline.

With a view of promoting convergence and collaboration among concerned agencies and related programs at various scales, the Philippines through DENR has established partnerships for: a) the joint protection of the Sulu-Sulawesi Marine Ecoregion with Indonesia and Malaysia in partnership with GIZ; b) collaboration with the University of the Philippines  Marine Science Institute  for the Philippine Rise Initiative; c) implementing the GEF/UNDP- SMARTSeas Project; d) the multilateral partnership for the Coral Triangle Initiative; and e) managing Key Biodiversity Areas of Southeast Asia in partnership with the ASEAN Center for Biodiversity. Through EO 510, the DENR has developed the Integrated River Basin Development and Management Framework, which provides the blueprint for protecting the country’s priority river basins by reducing pollution and ensuring the sustainable supply of clean and safe water for all. 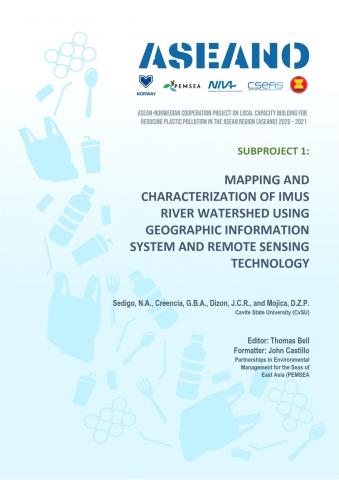 River systems have been identified as major pathways and transporters of wastes, including plastics, that ultimately end up in the oceans. The Imus River Watershed... 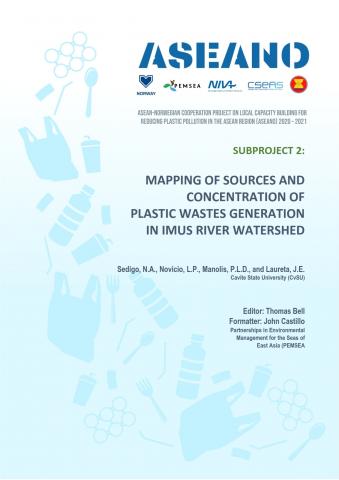 ASEANO Project Report: Mapping of Sources and Concentration of Plastic Waste in the Imus River Watershed 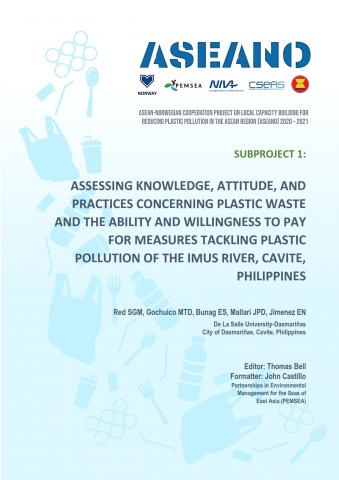 This study tackles the Imus River, one of the six major river systems in the province of Cavite. The main river is 38.4 kilometers long... 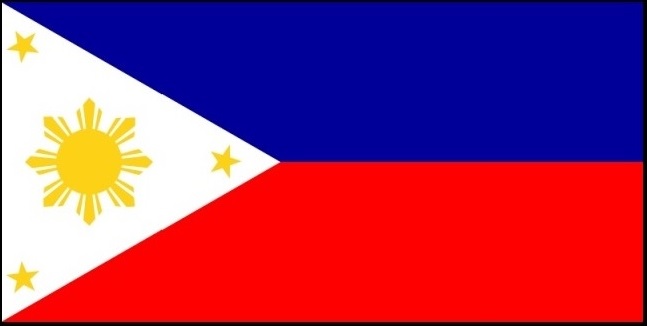