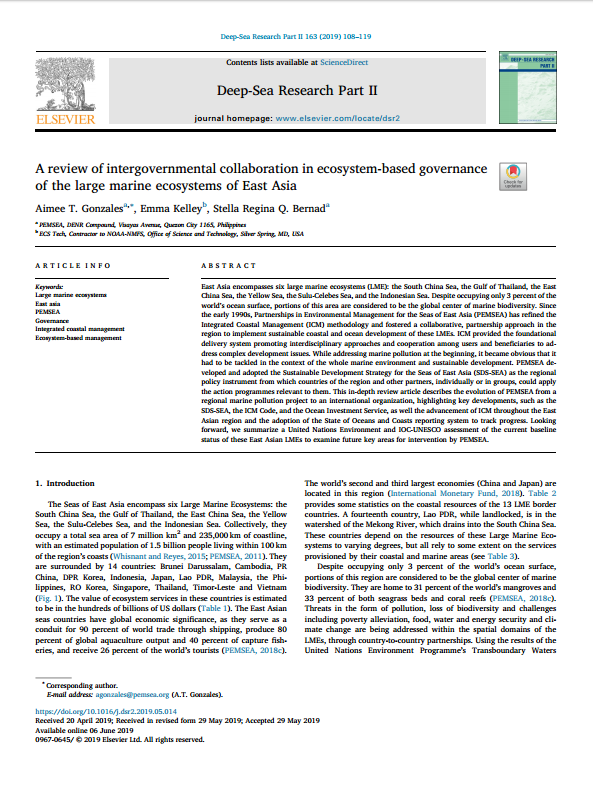 East Asia encompasses six large marine ecosystems (LME): the South China Sea, the Gulf of Thailand, the East China Sea, the Yellow Sea, the Sulu-Celebes Sea, and the Indonesian Sea. Despite occupying only 3 percent of the world’s ocean surface, portions of this area are considered to be the global center of marine biodiversity. Since the early 1990s, Partnerships in Environmental Management for the Seas of East Asia (PEMSEA) has refined the Integrated Coastal Management (ICM) methodology and fostered a collaborative, partnership approach in the region to implement sustainable coastal and ocean development of these LMEs. ICM provided the foundational delivery system promoting interdisciplinary approaches and cooperation among users and beneficiaries to address complex development issues. While addressing marine pollution at the beginning, it became obvious that it had to be tackled in the context of the whole marine environment and sustainable development. PEMSEA developed and adopted the Sustainable Development Strategy for the Seas of East Asia (SDS-SEA) as the regional policy instrument from which countries of the region and other partners, individually or in groups, could apply the action programmes relevant to them. This in-depth review article describes the evolution of PEMSEA from a regional marine pollution project to an international organization, highlighting key developments, such as the SDS-SEA, the ICM Code, and the Ocean Investment Service, as well the advancement of ICM throughout the East Asian region and the adoption of the State of Oceans and Coasts reporting system to track progress. Looking forward, we summarize a United Nations Environment and IOC-UNESCO assessment of the current baseline status of these East Asian LMEs to examine future key areas for intervention by PEMSEA. 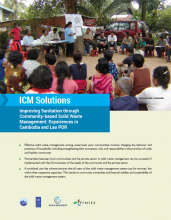 Inadequate waste management and sanitation has consequences on the health and well-being of communities and the local environment. In Sihanoukville (Cambodia) and the Sedone Provinces of Champasack, Saravanne and Sekong (Lao PDR), unsightly solid waste... 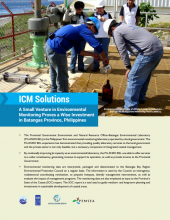 With the establishment of the ICM program in 1994, the Province of Batangas became aware of the issues and challenges associated with pollution prevention and management. Prior to ICM, monitoring data were fragmented and inconsistent:... 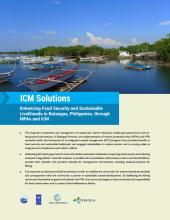 Enhancing Food Security and Sustainable Livelihoods in Batangas, Philippines, through MPAs and ICM

The long-term protection and management of coastal and marine resources entails good governance and on-the-ground interventions. In Batangas Province, the implementation of marine protected areas (MPAs) and MPA networks within the framework of an integrated...